This is my third attempt to implement a good method to deal with no-outs when calculating batting averages. The first two happened before this blog started (I've backdated one here), but both had flaws. The flaw in the one I just linked to is a subtle one, and I only realised it after reading this post by Charles Davis.

He was interested in calculating the average number of runs scored once you reach a century. This is basically the same question I have in projecting not-outs forward. If a batsman who averages 40 finishes 100 not out, how many extra runs would he have scored?

Now this example is extreme, but the problem is a significant one when you do this over all batsmen at all scores, because there are a lot of not-outs at each score. If you're interested, compare the graph below to the bad one in my earlier post.

For this graph, I took each batsman with a Test average of at least 40, and computed their average increases at each run (up to their highest score), and then took the average over all players at each score. If a batsman's highest score was a not-out, I added the batsman's average to it and turned it into an 'out'. 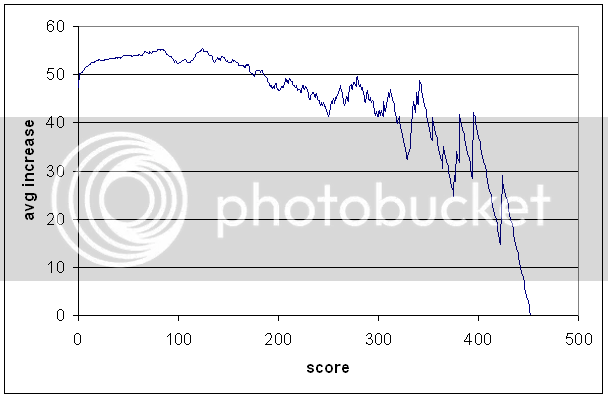 The dip either side of 100 is what you might call a psychological feature — it's there because batsmen often drop their concentration once reaching a century and get out soon afterwards. The curve rises again until about 125, and then there's a pretty steady downward trend, with two more psychological dips around 200 and 250. There also looks to be one around 300, but there aren't many data points there.

The curve has a lot of noise in it, and before using it to project not-outs forward, it's worth smoothing out the non-psychological bits. I didn't spend too much time doing this, and there are a couple of ugly splices, and in one place scoring a run actually sends you backwards by one run. That shouldn't be too serious in the grand scheme of things. 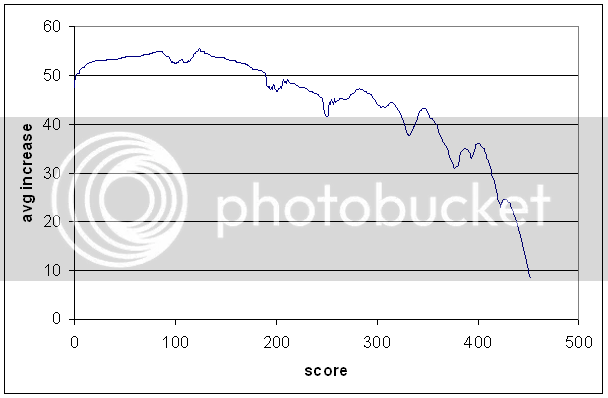 Now, you wouldn't want to just use this curve to project not-outs, because obviously some batsmen are better than others at making large scores. Steve Waugh v Mark Waugh is an obvious example. On the other hand, if you're projecting a not-out, and there's only one innings higher to work with, then that higher innings is probably not representative, and it's useful to use the overall average increase given in the graph.

Note that when using the graph on an individual batsman, I move it up or down so that the average increase from zero matches his average.

The co-efficients here are arbitrary, but I think they look OK. If there's one innings to work with, it gets about a 30% weight, and the graph gets 70% weight. If there are three innings, it's 50-50.


Overall there's not much change. Hammand and Sobers move up several places, but otherwise we're dealing with fairly small adjustments to the average.

Mike Hussey's adjustment is the largest of any batsman with an average over 40. That adjustment will likely come down as his career continues and his stats become more like those of other players.

Considering only batsmen who average over 40 with at least 50 innings, the average difference is -0,16. So on average, not-outs deflate averages by about a sixth of a run. There's a very slight (and noisy) trend saying that batsmen with a high proportion of not-outs have their averages deflated more, which also agrees with the idea that not-outs tend to deflate averages.

As I said, there's a lot of noise. In that latter dataset, there are 52 batsmen whose averages seem to be inflated by not-outs and 75 whose averages are deflated. But in almost all cases the differences are pretty small.

The moral of the story is not to worry about not-outs when looking at a batsman's stats.

One last comment. A paper by Clive Loader in 1996 considered Allan Border's career and the effects of not-outs on his average. It was only one example in the paper, which looked at something called censoring in various contexts. Using some kind of binomial model, he estimated that not-outs had deflated Border's average by between 1 or 2 runs. My numbers say that his average was inflated by about two fifths of a run. An unfortunate disagreement, and I probably won't get to the bottom of it without learning a good deal more statistics, because that paper uses methods beyond my current knowledge.

Comments:
Interesting analysis, which brings another question to my mind. Don't know if you have/would ever consider it, and it is obviously much harder to do, but what about one day averages? Some people consider Michael Bevan, for example to have an average that was almost ludicrously inflated by the large number not outs he had as a finisher. How would his/other top 1day batsmens averages fair under this system? I've seen a few other 1day average adjustments for different reasons (the economist, for example, did one), and some of the averages changed wildly when they adjusted it, but in vastly different ways depending how they did it.

I don't have an ODI database, so I couldn't say for sure what would happen there. My suspicion is that averages wouldn't change much, but there would be different factors at play - those in the middle to lower order would (presumably) tend to get out slogging at the death fairly often, so a 20 not out might only become (on average) a 35, rather than a 55. This would mean that ODI averages are often inflated by not-outs, but I don't know.

To be fair, that's not the whole story. In between at number five: 5 not-outs in 33 innings (15%), average of 41.6. I would interpret this as a biased sample of Bevan's batting though, rather than evidence for not-outs inflating averages.

Overall I don't think that Bevan's average is inflated much, if at all.