I've got what I think is an interesting post up at it Figures. It ranks wicket-keepers by the rate at which they let byes through, adjusted by country. It doesn't work for keepers who kept up to the stumps to fast bowling a lot (i.e., keepers from the olden days), but I'm happy with how well it works for modern keepers. Here is the full list (qualification: 20 Tests) for those who want to just see the results.

I must admit I hadn't heard of some of those guys near the top. Kirmani rang a bell, but Tamhane was new to me. I was happy to see in his Cricinfo profile that Wally Grout compared Tamhane to Don Tallon. It's unfortunate that Tallon (and Grout, and the rest) kept up to the stumps so often. It makes cross-era keeper comparisons difficult. (You can't just go by the prevailing rate of byes in world cricket at the time, otherwise modern keeper-batsmen would come up as the equal of Knott, Taylor, etc.).

Ideally, we'd be able to take this one step further and get a well-founded measure of a keeper-batsman. But the main difference between a good keeper and a bad one is the number of dismissals effected, and it would be close to impossible to get accurate estimates on, e.g., how many dismissals Knott would have had if he'd kept for Pakistan in the 1990's.

We're on the eve of what should be another fantastic battle of Test cricket, but this evening I finally got around to a simple study of the effect of the free hit rule in the IPL. The IPL's the only ball-by-ball database I have, otherwise I'd see if the results are the same in ODI's as well.

Anyway, I went through the tournament and found the run rate on the ball immediately following a no-ball (there might be some non-front-foot no-balls in there, but whatever...). The result was 140 runs off 82 balls, a run rate of 10.2 per over.

To work out how many runs you'd expect to have been scored if it wasn't a free hit, I used the overall run rates by over (actually I did a bit of smoothing first, fitting quadratic trends to the first six overs and remaining 14 overs). The graph looks like this: 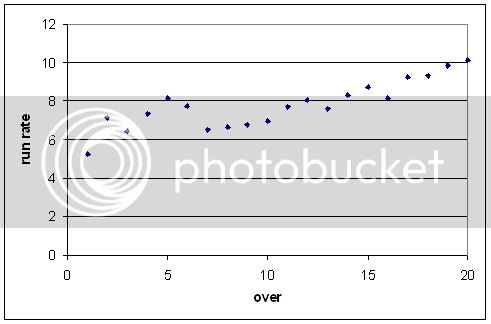 So, e.g., if there was a free hit in the 10th over, you'd assume that if it was a normal ball, 7.0/6 = 1.17 runs would have been scored off that ball. Doing this for each of the free hits, you end up with an expected score of 111 runs coming off those free hits, a run rate of 8.1 per over. So the batsmen are scoring more than usual off the free hits, but not by a lot. An extra third of a run per free hit, on average.

It is a nice check that the average run rate in the 20th over (when you're batting like they're all free hits anyway) was 10.1.

Presumably free hits in ODI's also go at about 10/over (or 1.7 per ball), so proportionally speaking, the punishment is greater in the 50-over form of the game.

That graph above is pretty interesting. There's a bit of noise, but the end of the fielding restrictions is very clear. It's interesting that the acceleration is gradual.

The batsmen are circumspect (relatively speaking) in the first over, and the effect certainly muhc larger than just the first over being just bowled by the best bowler (no-one had an economy rate as low as 5.2 in the IPL). Perhaps it is worth opening with your "fifth" bowler. I don't know.